Hand Therapy - Helping you get back to what you love!

Nov 27 Comments Off on Skier’s Thumb, more common than you think!

The most common thumb joint injury is called Skier’s Thumb or Gamekeeper’s Thumb. It occurs when the thumb is stretched too far away from the hand accidentally during a fall or playing sport. One of the supporting thumb ligaments is sprained or pulled off the bone with or without a small piece of bone attached. The thumb is usually swollen and painful to move, particularly when stretching it out or pinching and gripping. Often there is no sign of injury on x-ray, however there will be pain and sometimes instability of the joint indicating a ligament injury.

The ligament in question is called the Ulna Collateral Ligament (UCL) of the thumb metacarpophalangeal (MCP) joint. The good news is that most thumb UCL injuries recover well with therapy! There is only a small number that require surgery and in these cases it is because the ligament gets caught in some other soft tissue structures and cannot mend to the bone. This is called a Steiner Lesion and can be diagnosed on MRI if instability in the joint continues after casting or splinting treatment. 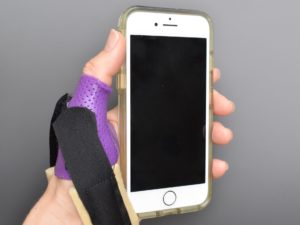 If you have a suspected Skier’s thumb injury, you will need to protect the injured ligament for 4-6 weeks in a splint or cast. A plaster cast is a cheap and effective way to rest injured joints, however if both the wrist and thumb are immobilised, then stiffness nearly always results. A hand therapist can provide you with a custom-made splint or orthosis, that only limits a small amount of thumb movement to protect the ligament but allows you to continue using your hand for many things. The splint is also removeable, allowing you to wash your hand and do some gentle movement exercises aimed at preventing stiffness.

Ligaments have poor blood supply and as a result take along time to heal. A hand therapist will be gradually increasing exercises, introducing strengthening at the appropriate time and giving advice regarding return to more demanding activities such as sports.

If you think you have a Skier’s Thumb injury, book an appointment with us today so that you can get back to what you love.

Read More
Aug 11 Comments Off on Don’t ignore a droopy finger. All you need to know about “Mallet Finger”

A common fingertip injury occurs when something hits the end of a straight finger forcing it to bend. Often, it’s a ball when playing sport! Afterwards the end joint of the finger doesn’t straighten properly. The resulting drooping fingertip looks a bit like a mallet or hammer, so we call it “Mallet Finger”.

The fingertip droops because the tendon that straightens the end joint is no longer attached to the bone and can’t do its job. Mallet finger can be either a direct tear to the tendon or, more commonly, a piece of bone that is attached to the tendon fractures away. Unfortunately, the problem won’t fix itself and if it’s ignored it can cause long-term pain, stiffness and deformity of one or both finger joints. 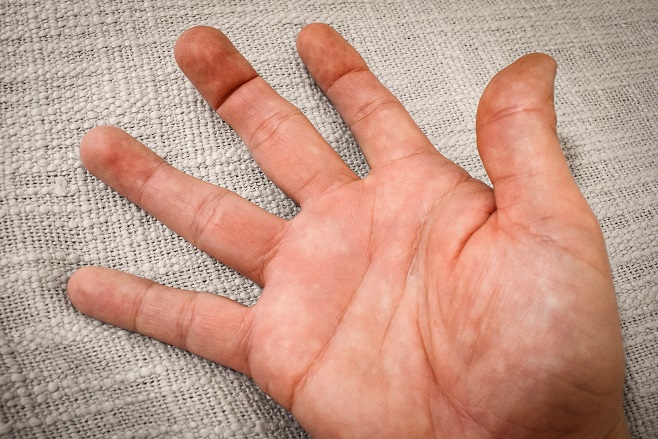 If you have a suspected mallet finger injury the first step is to visit your GP for an x-ray. This helps to determine whether there has been a bony injury or tendon injury. In rare cases a relatively large piece of bone breaks off, disrupting the joint entirely and requires surgery to correct the joint alignment. In most cases, there is only a small piece of bone or a tendon injury and this can be treated very effectively with hand therapy. Results are always better if you get treatment as soon as possible. If treatment is delayed by more than three months, it may be impossible to correct the problem and the joint may have to be surgically fused.

Early treatment with hand therapy is very simple! A custom-made splint that holds the tip of the finger very still must be worn continuously for six to eight weeks. It is very important NOT to bend the fingertip at all, not even once, for at least six weeks. If you do, the immobilisation period is reset to day one and you will need to be held in the splint for a further six weeks. Your treating therapist will show you how to safely wash the finger and reapply the splint without bending the fingertip. You will also be given gentle exercises for the middle finger joint to prevent it from getting stiff. 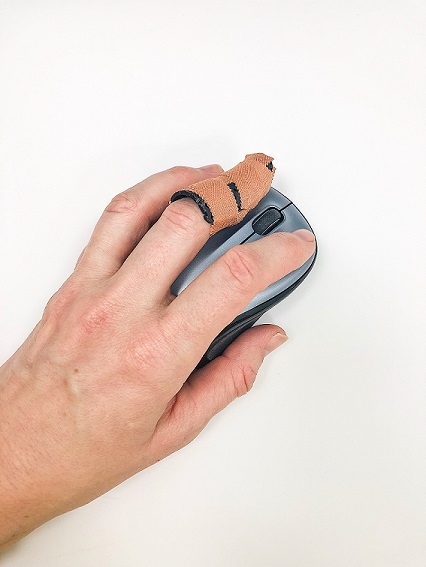 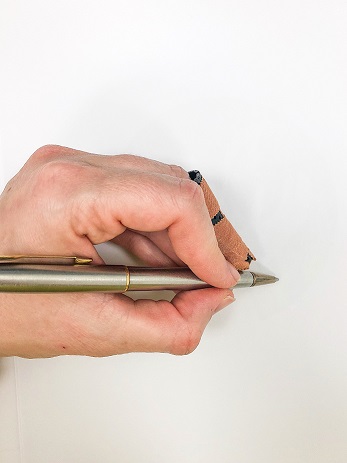 After six to eight weeks in the splint full-time, a gradual weaning process occurs under the guidance of your therapist. It is important that you do not return to sport or manual work without the splint on for 12 weeks after treatment commenced or else you are at risk of re-injuring the finger.

Don’t ignore a drooping finger, the treatment is simple and very effective if started as soon as possible. So don’t delay, if you’ve got any of the above symptoms takes steps towards your recovery and book in with an accredited hand therapist today!

Read More
May 24 Comments Off on Recovering from a Broken Wrist. Getting your plaster off is just the beginning…

A broken wrist is a common childhood injury. Four weeks in plaster and then everything is ok again. Most of us think it will be the same story for an adult, however that isn’t true. Whilst a broken wrist is also a common injury for an adult, unfortunately the recovery is not so easy. After the initial six weeks in plaster, your wrist and hand need a lot more time and work to get back to your pre-injury activities.

A broken wrist is usually a fracture of the distal radius, that is a break in the end of the forearm bone on the thumb side at or near the wrist joint. In older people, this can be caused by a simple fall, whereas in younger people this is usually caused by motor vehicle or sporting accidents. An American study published in 2009 (Ehsan & Stevanovic) estimated women as having a 15% chance of having a wrist fracture in their lifetime, whereas men have a 2% chance of a wrist fracture in their lifetime. An Australian study published in 2001 (Nguyen, Sambrook & Eisman) reported women to be four times more likely to fracture their distal radius than men.

Stiffness and weakness of the wrist AND hand are the most common problems after coming out of plaster, whether the fracture was treated in a cast or required a surgical fixation. Most people also experience some degree of swelling and pain, but this varies greatly from person to person. It is also important to consider that in the early days after the plaster comes off, whilst the bone has healed enough to allow movement and some light everyday hand use, it hasn’t healed to it’s full strength and this is likely to take at least 3 months after the injury. 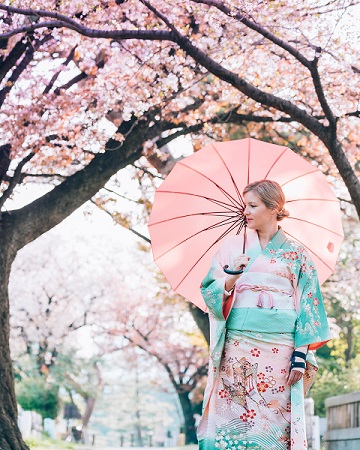 The therapist’s role is not only to prescribe exercises and materials for therapy but help you to understand the healing process and what activities are safe to commence at what time. This helps to prevent re-injury and unnecessary pain and frustration. It is a lengthy process the but investment of time and energy into your hand therapy regime will pay off in the future.

All images used in this post are courtesy of  www.meandmytravelbugs.com

Read More
Feb 15 Comments Off on Are you putting up with thumb pain?

If you have pain in your wrist or thumb when you write, use scissors, hold a knife or pinch things and you’re over 50, you may have base of thumb arthritis. This painful condition can prevent you from doing basic everyday things as well as leisure activities such as gardening or knitting. The good news is that you don’t need to give up four favourite hobbies!

The problem occurs from wear and tear of the mobile joint at the base of the thumb where it joins the wrist. We call this the first carpometacarpal (CMC) joint. The CMC joint is a saddle joint where the long bone of the thumb (first metacarpal) forms the rider and the small wrist bone (trapezium) is the saddle. The joint is highly mobile, allowing for the ability to oppose and rotate the thumb to form a wide variety of grip patterns from open grasp to pen grip to key pinch.

Unfortunately, forces at the tip of the thumb are magnified twelve times at the base, meaning that 1kg or pinch force translates into 12kg of force through the first CMC joint. For many people over time the smooth protective cartilage that covers the joint surfaces wears away. What’s left is bone rubbing on bone which is painful and causes swelling of the joint which in turn stretches the supporting soft tissues. Over time the joint may slip out of alignment causes a “z” deformity of the thumb.

There is a surgical joint replacement procedure that can be done in very painful cases, but the surgery is painful and has a 6-month recovery time. Despite the wear and tear nature of first CMC arthritis, therapy can be very helpful in reducing pain and preventing progression of the disease.

Hand therapy for base of thumb arthritis takes a three-pronged approach. Firstly, a small thumb splint helps to rest the CMC joint, minimise forces through the joint and reduce pain during functional tasks. Secondly, exercises aim to strengthen the supporting muscles around the joint to prevent it slipping out of alignment. Lastly, your therapist will discuss activity modification and show you how to do the things that are important to you without pain and to reduce load on the CMC joint.

So, if you’re experiencing any base of thumb arthritis pain, don’t wait.  Contact The Hand Recovery Centre today and get back to what you love sooner!

Wrist Sprains: What You Should Know